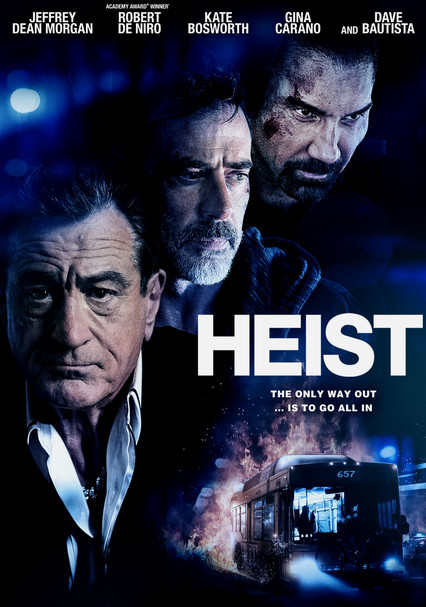 2015 R 1h 33m Blu-ray / DVD
Unable to afford his daughter's medical treatment, a fired card dealer takes desperate measures, teaming with a former co-worker to pull off a casino robbery. When the heist goes awry, they hijack a bus and use the passengers as bargaining chips.

Parents need to know that Heist (not to be confused with David Mamet's 2001 movie of the same name) is a crime thriller with very strong, constant language (including dozens of uses of "f--k" and "motherf----r") and graphic violence: shooting, killing, blood, fighting, and children in peril. One scene shows a man and a woman in bed, with her partly naked. Characters smoke cigarettes, and two minor characters appear to be drug addicts.

Man lying in bed with a young woman in a sexual way. She lies half out of the covers, with a naked leg and part of her behind showing.

Characters work together -- to rob a casino -- but their teamwork is terrible; no truly positive take-aways here.

Characters smoke cigarettes. Minor characters appear to be drug addicts (they're found in a "crack house").