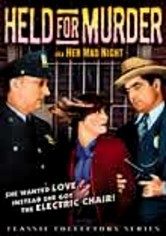 1932 NR 1h 7m DVD
Assuming that her irresponsible daughter is guilty of an apparent murder, a dutiful mother takes the heat from the authorities. But while the girl is off gallivanting on a whirlwind pleasure cruise, she's unaware that her mother is facing the electric chair for a death that was accidental. Irene Rich, Conway Tearle and Mary Carlisle co-star in this 1930s drama directed by E. Mason Hopper, originally titled Her Mad Night.