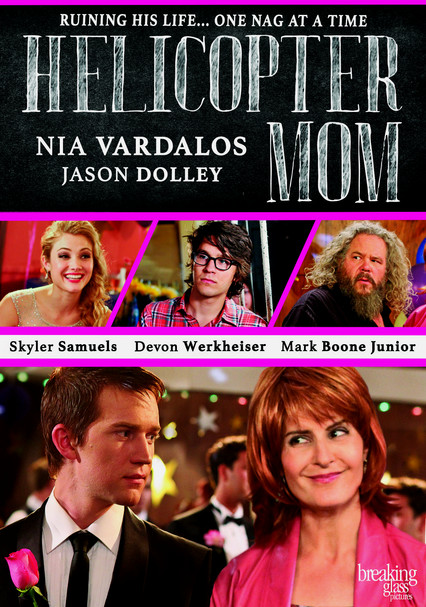 2015 NR 1h 24m DVD
Well-meaning but misguided mom Maggie Cooper has hopes of getting her sensitive son, Lloyd, into college on a scholarship. When she learns about a grant intended for gay students, Maggie "outs" the sexually confused Lloyd to his entire high school.

Parents need to know that Helicopter Mom is a comedy about an overly involved single mom who doesn't bother to ask her teen son about his sexual identity before outing him to friends, family, and his entire high school. There are many stereotypical jokes and comments about what being gay means (i.e. loving fashion, opera, theater, Paris, certain kinds of food), but the message is ultimately a positive one about accepting your kids as they are, not how you assume they are or want them to be. Infrequent language includes "s--t," "a--hole," and the slur "f-g"; there's also some drinking, including a father who's OK with his teenage son drinking in his presence (the son declines after one shot). Adults kiss and spend the night together, and a teen boy kisses both another boy and a girl. The movie is a good conversation starter about how not to handle your child's privacy and boundaries.

A boy confused about his sexuality kisses both another boy and then a girl. Divorced parents kiss and spend the night together.

A group of bikers insults Lloyd and his mom; their girlfriends chase after Maggie and Lloyd, who run away.

Parents should love their children unconditionally. Also a cautionary message about imposing a sexual identity on your kid our outing them (as anything!) before they're ready.

Adults drink at bars and restaurants. A father lets his 18-year-old son drink at a restaurant, but the son prefers to have water after doing one shot.