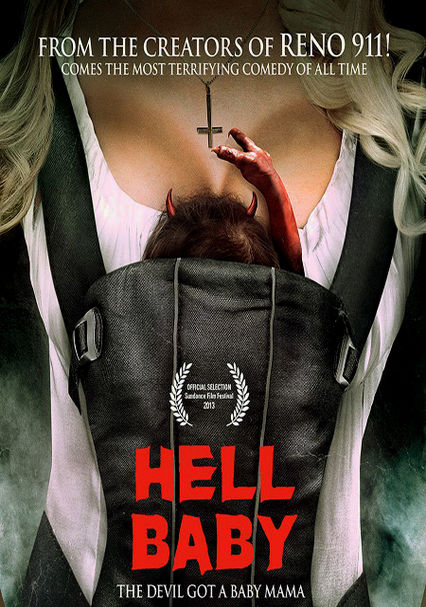 2013 UR 1h 38m Blu-ray / DVD
In this horror spoof, an expectant couple moves into their new home, only to learn that it comes with a deadly demonic curse. With the body count rising quickly, the Vatican's elite exorcism team is on the case.

Parents need to know that Hell Baby is a crude comedy with horror elements. It features quite a bit of comical blood and gore, with many characters dying, and adult characters trying to catch, beat up, and kill a newborn demon baby. Sex is a big issue, with full-frontal female nudity, very strong innuendo and suggestion, as well as scenes inside a strip club, and images of an adult magazine. Language is likewise strong, with multiple uses of "f--k," "s--t," "bitch," and more. Two adult characters smoke cigarettes almost constantly, many of the characters smoke pot and get high, and most of the characters drink beer, wine, or hard alcohol; it's all played for humor. Characters eat in a real New Orleans restaurant, and the scenes play like commercials. Some Apple products and Facebook are mentioned. The movie is available VOD as well as in theaters, so parents beware.

A female character is shown fully naked, head-to-toe, back and front, for several moments (she also oils her breasts). A man's naked bottom is briefly shown. A man receives oral sex under the covers (nothing graphic is seen). Scenes take place in a strip club, with at least two topless women, lap dancing, and other sexy dancing. An "old lady" is shown naked; her breasts are visible, but overall, she looks more like a rubber suit than an actual person. A married couple occasionally kisses and thinks about sex. The outline of a man's penis is seen through biking shorts. The cover and an inside page of a (fake) issue of OUI magazine are shown; there's no nudity, but it's definitely suggestive (and it's referred to as "porn").

Though it's all played for laughs, the movie has some very bloody and gory violence. Characters punch, stab at, and burn a little demon baby that looks fake, but it still feels cruel. Adult characters also toss the demon baby back and forth, and a "real" baby gets caught up in the tossing. Many characters die. Characters are bitten, scratched, and shot, with lots of spurting blood. A victim is shown with his entrails hanging out. In flashback, characters are shot, gored by a bull, and attacked by a snake. The movie also has some scary stuff, like faces in windows and sudden jump-shocks.

Though the movie is very crude, bloody, and gory, it does have a few sly comments about race relations, and there are some interesting twists on stereotypical behavior. But other stereotypes are more typical and offensive.

Facebook, Apple iPhone, and Apple MacBook Pro are shown and/or mentioned. Several scenes take place in Domilise's Po-Boy & Bar, with characters eating po-boys, drinking beer, and making lots of "yummy" noises; it's like an advertisement for the place, though it seems to be only a local New Orleans restaurant, rather than a chain.