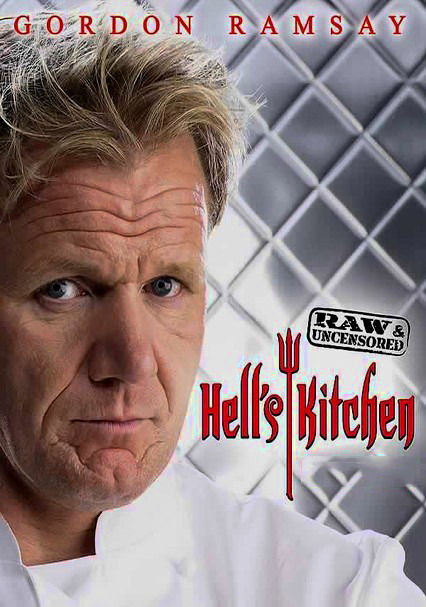 2005 NR 4 seasons
No chef is safe in this elimination-style reality competition built around the fiery persona of Gordon Ramsay, a celebrity chef who puts a group of gourmands and home cooks through the paces in pursuit of a coveted post at a top-rated restaurant.

World-renowned chef Gordon Ramsay returns to put another group of willing victims through his own special chef boot camp in the second season of the popular reality competition series. This time, the lucky winner will earn the title of senior chef at the Terra Rossa restaurant at Red Rock Resort and Casino in Las Vegas. But first, he or she will have to survive Ramsay's legendary caustic manner and acerbic tongue.

World-famous chef Gordon Ramsay turns the heat to extra-high in this third season of the hit reality series as 12 contestants battle one another for the coveted title of head chef at the Green Valley Ranch resort and spa in Henderson, Nev. Ramsay tests the aspiring chefs' mettle with nearly impossible tasks, backbreaking schedules and constant verbal abuse. But the lucky winner who lives through the nightmare will wind up with a dream job.

The fourth season of this high-stakes cooking competition presided over by headstrong British chef Gordon Ramsay serves up 15 brave souls -- three more than in earlier seasons -- who are competing for a $250,000 post at a West Hollywood restaurant. Contestants include an electrician from North Carolina, a stay-at-home dad from South Carolina, a culinary student from St. Louis and a receptionist from New York City.

Outspoken British foodie Gordon Ramsay turns up the heat in the fifth season of this televised cooking competition that pits 16 chefs against one another in a high-stakes battle for a $250,000 post at the Borgata, an Atlantic City hotel and casino. Contestants this time around include a food court chef from New York, a cooking school instructor from Nebraska, a private caterer from New Jersey and a line cook from Las Vegas.

Parents need to know that this competitive reality show features a foul-mouthed chef who regularly insults and humiliates the contestants. Those who remain calm under pressure and work through the pain of insults, cuts, and burns are rewarded with an occasional compliment from the raging chef. When out of the kitchen, the contestants drink, smoke, and linger in the hot tub wearing revealing attire.

The chef pushes plates of food into contestants' chests. Cooks sometimes cut and burn themselves accidently.

The chef's insults are full of foul language, and the contestants curse often as well. All severe cursing is bleeped and mouths are fuzzed over. Words like "hell" and "damn" are frequent.

Due to the show's competetive nature, contestants are sometimes unsportsmanlike and conniving.

Gordon Ramsay is himself a commodity, and sometimes the show plays this up. Shots of his magazine covers and restaurants appear occasionally.

Contestants drink and smoke when they're off kitchen duty.