Hellbound: Book of the Dead 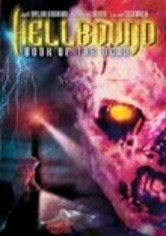 Hellbound: Book of the Dead

2003 R 1h 23m DVD
Married couple Lane (Jeff Dylan Graham) and Diane (Elizabeth North) find an old book of magic that was bound in hell and is meant to bring back the dead. Desperate to resurrect her dead sister, Diane uses one of the spells from the book but accidentally kills a man instead. When the same spell doesn't bring him back, Lane cuts the body into pieces with the intention of tossing them into the bay ... and that's when the spell begins to kick in!