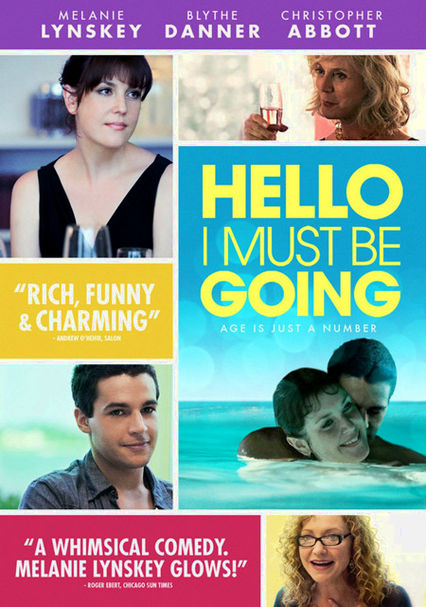 2012 R 1h 35m DVD
When her husband decides that he wants a divorce, 35-year-old Amy Minsky is faced with the humiliation of moving back into her parents' home. Despite her battered self-image, Amy manages to inspire the ardor of a determined teenage boy.

Parents need to know that Hello I Must Be Going is a mature dramedy with several weighty themes: post-divorce angst, a May-December (or, rather, May September) romance, and depression. There are plenty of sexually charged scenes of a couple making out and more (complete with requisite heavy breathing), though there isn't a ton of nudity. The same couple goes skinny-dipping in the dark, but viewers won't really be able to make out any of their body parts there, either. There's also a fair bit of swearing ("s--t" and "f-ck") and some pot-smoking and drinking, too, with some characters ending up throwing-up drunk.

Shadowy sex scenes in cars and rooms are filmed so that viewers don't see very much (a bare shoulder, people in their underwear, etc). The sounds of a couple having sex are heard, and they talk about making each other feel good. They also go skinny-dipping (but again, viewers don't see a lot of body parts).

A mother and daughter scream and yell at each other.

Fairly frequent use of words including "s--t" and "f--k."

Love knows no boundaries, including age or timing. And families can support each other, no matter the circumstances or the dynamics. Themes include coping with post-divorce angst and depression.

Adult characters smoke pot and talk about the effects of getting high. They also drink, and one character gets so inebriated that she throws up in a car.