Helloween: Keeper of the Seven Keys 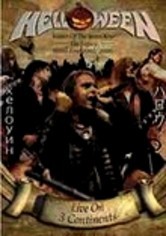 Helloween: Keeper of the Seven Keys

2005 NR 2 discs
Widely credited with inventing the power metal genre, German rockers Helloween bring their head-banging thrash fests to Brazil, Japan and Bulgaria in this series of performances culled from their 2005-06 world tour. In addition to blazing renditions of fan favorites such as "The King for 1,000 Years" and "Dr. Stein," the video includes an inside look at the band's life on the road via behind-the-scenes footage and interviews.