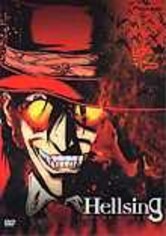 2002 NR 4 discs
Led by Integra Hellsing, the mysterious Hellsing organization works to protect mankind from supernatural threats, a mission the agency accomplishes by relying heavily on the abilities of its top operative, the renegade vampire Alucard. Throughout this anime series, the Hellsing fighters deal with attempts on the Queen's life, rival agents from the Vatican and attacks by the dangerous Valentine brothers.