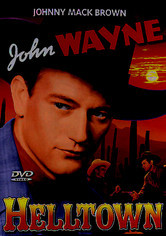 1937 NR 1h 0m DVD
After he's duped into giving up his cousin's precious herd in a crooked card game, reckless cowpoke Dare Rudd (John Wayne) is forced to strap on his six-shooter and take down a dastardly band of outlaws led by Bart Hammond (Monte Blue). Adapted from the writings of celebrated Western novelist Zane Grey, this 1937 B Western also stars Marsha Hunt as the beautiful Judy Worstall and Johnny Mack Brown as Rudd's ill-fated cousin Tom.