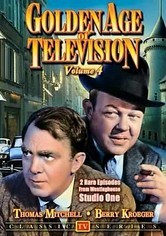 1951 NR 2h 2m DVD
This volume pops the cork on a pair of vintage episodes from Westinghouse's "Studio One" anthology series, which migrated from radio to the small screen in 1948. In "Henry IV," an affluent Italian believes he's an 11th-century Roman emperor, and in "The Story of Meg Mallory," a kidnapped politician's daughter becomes smitten with her captor. Berry Kroeger, Richard Purdy, Thomas Mitchell, Wendy Drew and Skip Homeier star.