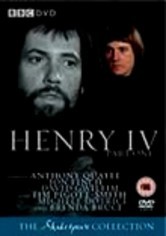 1979 NR 2 discs
King Henry IV's reign is threatened by rebellion, and his son, Prince Hal, has been led astray by the freewheeling Falstaff. Only when Hal turns away from Falstaff and his lowlife friends will he see the honor in ascending to the throne. With Henry IV falling ill, Hal's moment of decision is at hand. Anthony Quayle, Jon Finch and David Gwillim star in a production from the BBC's presentation of the complete works of William Shakespeare.