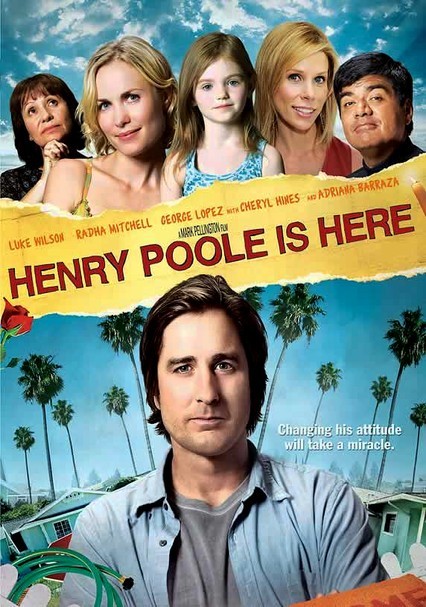 2008 PG 1h 41m Blu-ray / DVD
Rather than living his last days to the fullest, terminally ill Henry Poole cuts himself off from his fiancée and his family. But his self-imposed exile is interrupted by a fortuitous miracle and a clash with his eccentric, meddling neighbors.

Parents need to know that this flawed-but-interesting dramedy takes on a potentially overwhelming topic -- faith -- and manages to make it approachable. It even stirs a bit of hope. That said, it's so geared up for a fight that it misses its chance to be a truly profound discussion movie. In some ways the content is age-appropriate for tweens -- language, violence, and sexual content are all mild -- but in others it's very mature. The main character is a terminally ill man who drinks like a fish and doesn't seem to care about living -- which may feel too tragic, or even scary, for young viewers. Even the religious themes (neighbors are having visions in the main character's back yard) may overwhelm some kids.

A kiss between two adults who are falling in love.

Hints of a child's troubled childhood; a man on the edge knocks down an entire house by hacking at it with an axe; discussions about a child witnessing horrible fights between her now-divorced parents.

A man who is clearly an alcoholic seems hell-bent on performing a slow suicide by indulging in destructive behavior. He's also anti-social. But he goes through a change, fueled in part by his kindly new neighbors, and he opens his heart in the end.

Lots of drinking -- the main character, who is terminally ill and careless about life, drinks vodka and other liquor throughout the day as if it's water.