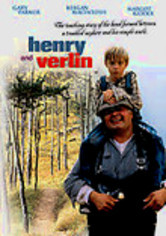 1994 NR 1h 27m DVD
Keegan MacIntosh stars as Verlin, a mute boy whose world begins to open up when he's befriended by his mentally challenged Uncle Henry (Gary Farmer). But when Henry is sent to an institution, Verlin's world threatens to crumble around him again. Written and directed by Gary Ledbetter and based on stories by Ken Ledbetter, this Depression-era drama also features Margot Kidder and David Cronenberg.