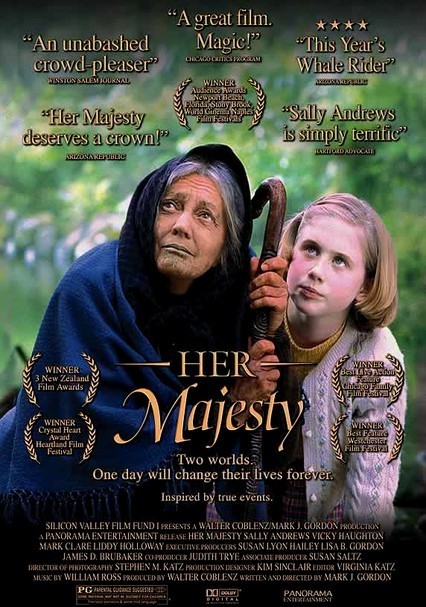 2001 PG 1h 44m DVD
Thirteen-year-old Elizabeth Wakefield (Sally Andrews) lives in the quaint town of Middleton, New Zealand, and her lifelong dream of meeting Queen Elizabeth looks as if it may come true when the queen schedules a visit. But the youngster's loyalties (and priorities) are tested when her friend Hira (Vicky Haughton), a Maori tribeswoman, runs afoul of local authorities. It seems her eyesore of a house is smack-dab in the middle of the parade route.

Parents need to know that there is some mild swearing ("hell," "damn," "ass") and a few minor sexual references (Elizabeth's brother comments on her undeveloped chest and the town's mayor has an affair with a prominent woman). Hira Mata smokes a pipe and Elizabeth's brother Stuart and his friends drink alcohol (Stuart is promptly punished). Stuart constantly displays bad behavior, from smashing a window and making disparaging remarks about the Maoris to attempting to burn down a house, but the movie makes it clear that his actions are not acceptable. The movie very directly attacks racist attitudes and promotes embracing and celebrating other cultures. Elizabeth is a positive, strong role model.

The mayor has an affair; a brother calls his sister "flat-chested". Elizabeth has an innocent crush on her drill team leader.

Elizabeth points a gun in order to stop her brother from burning down a house.

Some mild language, including "damn" and "hell".

Elizabeth's brother behaves badly (he vandalizes a garden, throws a rock at a window, lies, torments his sister, makes racist comments, and tries to burn down a house), but the movie makes it clear that his actions are not acceptable. Tolerance and appreciation of other cultures is a theme of the movie.