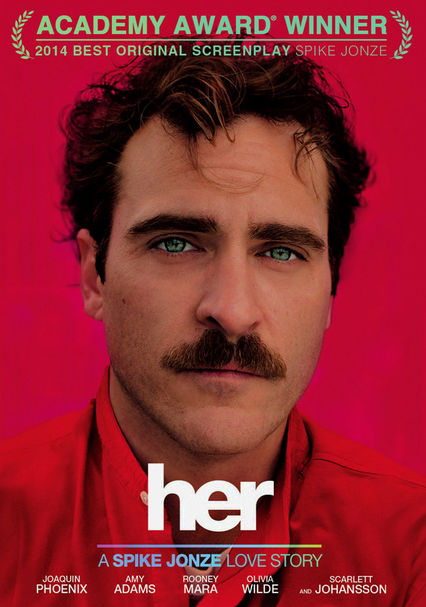 2013 R 2h 6m Blu-ray / DVD
In this sci-fi romantic comedy starring Joaquin Phoenix, love comes to a lonely young writer in the sleekest of packages when he finds himself falling for the advanced operating system he purchased to run his life.

Parents need to know that Her is a beautiful, unusual romantic tale whose protagonist falls in love with a computer's voice, an offbeat coupling that may be difficult for younger viewers to comprehend. The film also takes on some mature themes, including the crumbling of a marriage and the mourning period that comes when a relationship breaks apart. Expect some swearing (including "f--k"), and scenes where a character has loud, enthusiastic sex with a voice. There's a bit of quick topless nudity and some sexy moments between adults.

Two instances where a man has a version of phone sex; pleasure is audible and extended. A woman straddles a man and kisses him. One image of a topless pregnant woman that becomes fodder for a sexual fantasy.

Contentious arguments between a couple shown in flashbacks.

The movie's depiction of love is profound and moving, and shows us that love can happen in strange ways, not always when we're looking for it, and that it can change us deeply if we can be open to it.