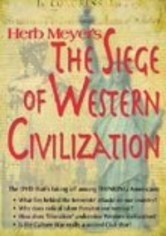 2004 NR 0h 42m DVD
Former CIA official Herb Meyer responds to Michael Moore's controversial documentary Fahrenheit 9/11 with this right-leaning film, in which Meyer identifies threats to America and outlines his prevention plan. With an eye toward the history of Western civilization, Meyer details his thoughts on terrorism, the U.S. economy, radical Islam, Iraq and Afghanistan, the potential for a second U.S. civil war and much more.