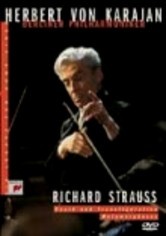 2004 NR 1h 0m DVD
Maestro Herbert Von Karajan conducts the Berlin Philharmonic Orchestra in this 1984 live concert film that includes masterful performances of Richard Strauss's "Death and Transfiguration" and "Metamorphoses." From Von Karajan's first downbeat to the last flourish of his baton, you'll thrill to all the great music.