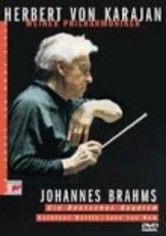 1985 NR 1h 22m DVD
Conductor Herbert von Karajan spent much of his career exploring the work of Johannes Brahms and in particular his A German Requiem. This 1985 concert, representing the sum of von Karajan's study, features vocalists José van Dam and Kathleen Battle. The performance by the Vienna Philharmonic not only exemplifies the maestro's skill, but also ironically reflects his waning years in its funereal subject matter.