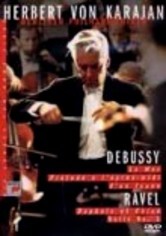 1985 NR 0h 54m DVD
Herbert vVon Karajan conducts three romantic masterworks in this pair of concerts filmed late in his tenure with the Berlin Philharmonic. First on the bill are two works by Debussy, "La Mer" and "Prelude to the Afternoon of a Fawn." This is followed by a complete performance of Maurice Ravel's "Daphnis et Chloe." The concerts reveal the mastery that made Von Karajan, nearly 80 at the time, arguably the 20th century's greatest conductor.