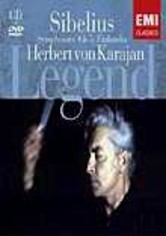 2004 NR 0h 10m DVD
The main attraction on this sampler disc is footage from a 1970 concert during which mythic conductor Herbert Von Karajan led the acclaimed Orchestre de Paris in the final movement of Berlioz's "Symphonie Fantastique." The collection also features several clips and highlights from other Von Karajan performances, as well as a promotional reel and video snippets from EMI/IMG's award-winning classical DVD series.