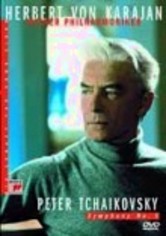 1984 NR 0h 52m DVD
This installment of the Herbert von Karajan: His Legacy series showcases the acclaimed conductor leading the Wiener Philharmonic Orchestra in a 1984 performance of Pyotr Ilyich Tchaikovsky's Symphony no. 5 in E Minor, op. 64. One of the most legendary figures in 20th-century classical music, the Austrian-born von Karajan helmed the Berlin Philharmonic for more than 30 years, from 1955 to 1989.