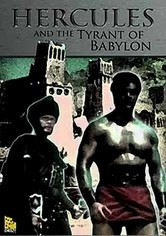 1964 NR 1h 26m DVD
After the king of Babylon captures the queen of Helledes, Hercules (Peter Lupus) sets off to rescue the kidnapped royal in this sword-and-sandals epic. At first, the Babylonian leaders welcome the strongman openly as a guest, but soon, they challenge him to deadly battles with their top soldiers. Lupus, credited here as Rock Stevens, went on to star in the popular "Mission: Impossible" television series.