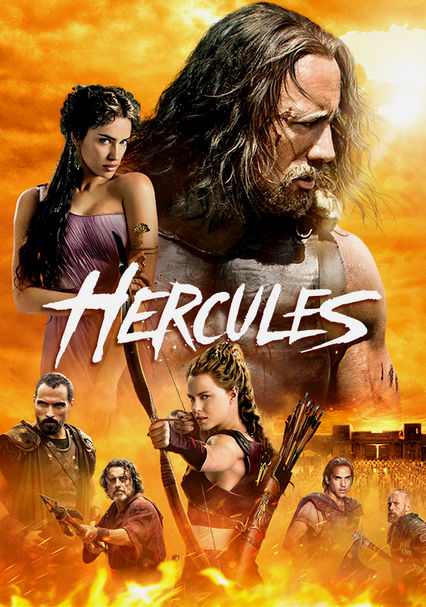 2014 PG-13 1h 39m Blu-ray / DVD
When world-weary Hercules, now a mercenary, is asked to defeat a savage warlord, he must redeem his honor and his reputation as a mighty demigod. With his companions, Hercules renews his faith in justice in this adaptation of the graphic novel.

Parents need to know that Hercules stars Dwayne "The Rock" Johnson as an older and more experienced version of the legendary warrior. Directed by Brett Ratner and based on a comic book, the movie has lots of action/fantasy violence, a high body count (people are killed in battle, as well as by wolves and crushed by falling structures), and a scene in which a boy's life is threatened. There's also occasional but not frequent strong language (mostly "s--t," plus one "f--king") and brief flashbacks of Hercules' wife looking sultry, kissing or even disrobing (her behind is shown). People unfamiliar with the legend will learn about certain aspects of it -- like Hercules' "twelve labors," including fighting the Nemean Lion, the Lernaean Hydra, the Erymanthian Boar, and more.

Brief flashbacks to Hercules' dead wife kissing him; in one scene, she's shown nude from the back (her behind is shown, but it's a fast glimpse, and the memory turns to bloodier thoughts). Some innuendo/double entendres.

Lots of fight scenes and battle sequences that lead to a hefty body count. People are killed with weapons (spears, arrows, knives, scythes, etc.) and by wolves and falling structures. There are also potentially jump-worthy scenes in the flashback when Hercules defeats the lion, hydra, and boar. Although many people die, there are only a few emotional deaths or moments: A boy's life is threatened, a woman is nearly executed, and a family is killed by hungry wolves.

Amid the many violent battle scenes, this take on Hercules has a valuable lesson about the importance of protecting the disenfranchised and oppressed -- and also of having your friend's back when he needs help.

People in the background eat and drink at a feast.