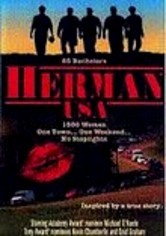 2001 NR 1h 29m DVD
In this quirky romantic comedy inspired by a true story, an influx of women invade the small town of Herman, Minn., to get their hands on a surplus of bachelors yearning for female companionship. When the persuasive "cry from the heart" of Herman's lonely men becomes a big-time news story, it unwittingly attracts a swarm of single women from 38 states and four different foreign countries, adding 1,500 residents to the tiny hamlet of 485.