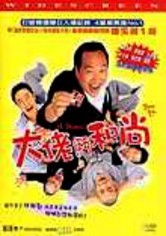 2001 NR 1h 37m DVD
This Korean comedy finds a group of thugs seeking refuge in a Buddhist monastery to escape a nasty gang war. Quickly tiring of the ascetic existence of their hosts, the thugs begin to get restless, and their rowdy behavior soon wears the monks' patience thin. Deciding to have some fun with their impolite guests, the monks devise a series of games for the thugs in order to curb their obnoxious behavior.