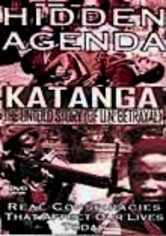 2003 NR 1h 0m DVD
Learn the horrifying story of what occurred in the Communist state of Katanga from 1960-62. During that time, the United Nations fought an unjustified war against the African region of Katanga, calling it a peacekeeping effort; the land is now controlled by the Communist nation of Zaire (formerly the Central Congo). This documentary aims to reveal the story of Katanga before more crimes are committed under the façade of peace.