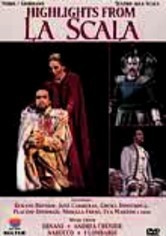 1990 NR 0h 59m DVD
This compilation of outstanding performances from Italy's leading opera house, Teatro alla Scala in Milan, features some of the brightest stars to ever grace the stage. Highlights include Placido Domingo, Mirella Freni, Renato Bruson and Nicolai Ghiaurov in Verdi's "Ernani," Jose Carreras and Eva Marton in Giordano's "Andrea Chenier," Bruson and Ghena Dimitrova in Verdi's "Nabucco" and Carreras and Dimitrova in Verdi's "I, Lombardi."