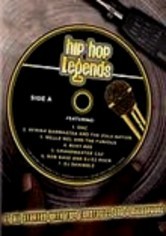 2007 NR 1h 2m DVD
Exclusive interviews with some of hip-hop's biggest stars combine to tell the collective history of the genre, stretching all the way back to the early 1970s, when the hip-hop sound was still in its infancy. Featured personalities include DMC of Run-DMC, Afrika Bambaataa and the Zulu Nation, Melle Mel and the Furious Five, Busy Bee, Kurtis Blow, DJ Skribble, Crash Crew, Grandmaster Caz, and Rob Base and DJ EZ Rock.