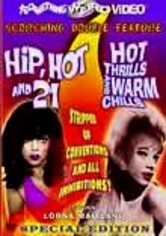 1967 NR 3h 30m DVD
Two titillating titles turn up the heat in this sexploitation double feature. In Hip, Hot and 21, a hillbilly hottie (Diane McClunkey) is sold by her stepdad to a local stud for $50. But soon enough, the new bride is sent running into the arms of a drug-dealing lesbian hooker. In Hot Thrills, Warm Chills, a former gangster's moll (Rita Alexander) and two other honeys steal a diamond crown during Mardi Gras and hide out in a cemetery.