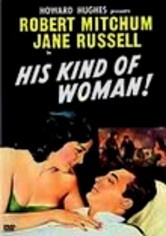 1951 NR 2h 0m DVD
Robert Mitchum plays a luckless gambler who agrees to sell his identity to a deported mobster (Raymond Burr). Jane Russell co-stars as a singer pretending to be an heiress, in an attempt to get her hooks into a Shakespeare-slinging actor (Vincent Price). These and other shady characters wind up in a Mexican resort, where the fun really begins. Howard Hughes produced this comedy noir as a vehicle for his rising star Russell.