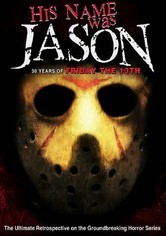 2009 NR 1h 24m DVD
Exploring the legacy of a villain who's fueled a franchise for nearly 30 years and is on a first-name basis with horror fans everywhere, this documentary pays tribute to Jason Voorhees, the hockey-masked star character of the Friday the 13th films. Hosted by special effects legend Tom Savini, the film includes movie clips, behind-the-scenes footage and interviews with actors, filmmakers and devotees.