Historic Traveler: To Win the War 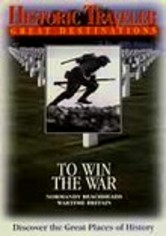 Historic Traveler: To Win the War

1997 NR 0h 50m DVD
See where some of the biggest battles of World War II were planned and fought in this fascinating travelogue, including the British cabinet war rooms, the Royal Air Force Museum and the beaches of Normandy where Allied forces waded ashore on D-Day. Hosted by Emmy Award winner Bill Boggs, these episodes of the historical series explain what it took for the Allies to stand up to the overwhelming Nazi war machine -- and win.