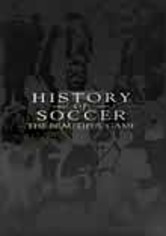 2003 NR 7 discs
Soccer fans, rejoice: This series chronicles the sport from its origins to its future and includes never-before-seen 1897 footage, rare reels of the first FA Cup Final and other historical games, clips of every World Cup Final goal, interviews with soccer greats and more. The program dives into topics such as European, Brazilian and South American superpowers, soccer clubs vs. national teams and Africa's impact on the sport.