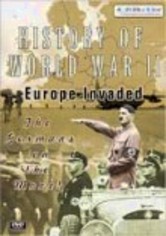 1943 NR 0h 57m DVD
This fascinating documentary traces the fearsome rise of Adolf Hitler in Europe and his persistent march through the continent to spread his message of hate, prejudice and menace. War became inevitable with the German invasion of Poland in 1939, dubbed the Blitzkrieg, which was soon followed by the Sitzkrieg, allowing Hitler's troops to strengthen, stockpile ammunitions and, ultimately, gain tactical superiority.