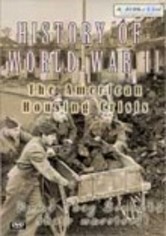 1944 NR 1h 5m DVD
Having shipped its men off to fight in World War II, America subsequently suffered a severe shortage in housing, since there weren't enough workers to build homes. This documentary examines the troops' triumphant homecoming to a country without sufficient homes. Victorious abroad, the returning soldiers were defeated in finding a roof over their heads on the domestic front. The solutions, both brilliant and stopgap, then spawned a building boom.