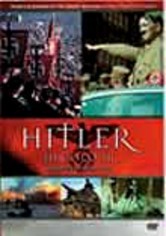 2005 NR 1h 21m DVD
Composed entirely of original color film, this documentary chronicles Hitler's rise to power, from his 1933 election to the 1945 fall of Berlin. Rare color footage is combined with eyewitness accounts and excerpts from diaries and correspondence. Footage includes Nazi rallies, Hitler's meeting with Lloyd George, the Buchenwald concentration camp, Warsaw's Jewish ghetto, the invasion of Poland, the Battle of Britain and the fall of Berlin.