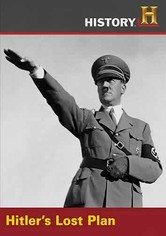 2008 NR 0h 50m DVD
Prompted by a little-known manuscript widely attributed to Adolf Hitler and discovered by an American historian , this engrossing History Channel documentary dissects Hitler's master plan for world domination, which never quite came to fruition. Included among the stacks of documents the United States seized from Nazi Germany, the shocking strategy was detailed in a "secret book" that appears to be an unpublished Mein Kampf sequel.