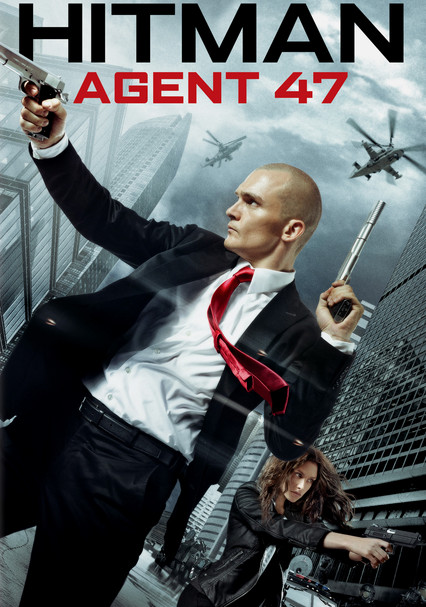 2015 R 1h 36m Blu-ray / DVD
Drawing inspiration from the "Hitman" series of video games, this futuristic action-thriller follows young Katia van Dees as she joins forces with a genetically engineered assassin to find her missing father and unravel the mystery of her origins.

Parents need to know that Hitman: Agent 47 is the second film based on the popular Hitman video game series about a cloned assassin who works for a covert international organization. The movie's Agent 47 resembles his gaming character in looks and characterization, as well as his impressive ability to kill dozens and dozens of people, often in gory/bloody ways. You can expect plenty of strong language (mostly "f--k" and "s--t") and tons violence, from close-up executions and sniper-level shootings to explosions and car chases/crashes. Although there aren't any sex scenes, several shots focus on a key female character's body, which is highlighted in a towel, bikini, and in the shower (but always just short of actual nudity). Those unfamiliar with the game series and it's storyline are clearly not the intended audience.

A female character occasionally wears tight/revealing clothes like a bikini bottom but no top (she's not shown fully topless), a white tank top with no bra, or just a towel. A shower scene reveals the silhouette of her stomach and rear end, but only from the side. Extras kiss in a crowd scene.

Gory and bloody, with lots of blood splattering and cringe-worthy assassination scenes. Not all of the killings are up close -- many are from far away (Agent 47 is an excellent marksman who can shoot people from remarkable distances) -- but the body count is incredibly high. People are mostly shot, but they're also impaled or blown up or crushed to death.

Amid the mayhem, the movie's message is that you always have a choice. Just because you're expected to act a certain way or follow a certain path doesn't mean it has to be so, because you can choose to do something different.

So many close-ups of an Audi sedan that the movie seems like a long commercial for it. Also, of course, the connection to the video game on which the movie is based. Other brands seen include Mercedes, Siemens.