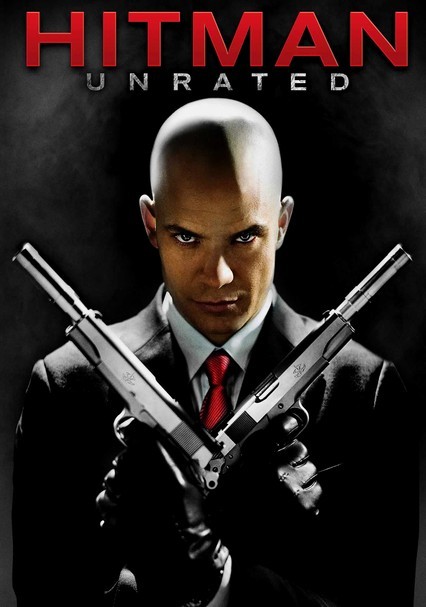 2007 UR 1h 34m Blu-ray / DVD
When a gun-for-hire known only as Agent 47 gets tangled in a political takeover and finds himself hunted by both Interpol and the Russian military, he tries to uncover who set him up while battling newfound feelings for a beautiful woman.

Parents need to know that this movie is based on a violent video game about a professional assassin; not surprisingly, it includes lots of shooting, fighting, stabbing, falling, blood, and injured or dead bodies. Characters are ruthless and calculating, even the ones who are meant to be the "heroes." The movie's damsel in distress is hyper-sexualized -- there are repeated shots of her breasts (sometimes naked), legs, back, and pouty mouth. Language includes several uses of "f--k," plus other profanity. Explicit cocaine snorting in one scene, plus cigarette smoking and drinking.

Bare breasts in several scenes, plus visible nipples underneath a blouse. A female character also shows cleavage and lots of leg and wears very short skirts. She straddles the hero on a bed, but he resists her efforts to seduce him. The villain is flanked by women in skimpy outfits, showing more cleavage and skin. Agent 47 appears in the shower (nothing explicit).

As the title suggests, violence is essentially nonstop, featuring explosions, guns, vehicular collisions, blood, broken glass, flying bodies and limbs, and broken furniture and walls (especially in hotels). Lots of bodies and lots of blood. Some point-of-view shots emulate a first-person shooter game. Weapons include assorted guns (automatics, handguns, vehicle-mounted guns), knives, chains, and an elaborate contraption whereby a victim is tied up in a tub with a gun aimed at him. In flashbacks, children are trained to shoot, fight, and kill.

The hero is a cold, highly trained assassin; the damsel in distress is a prostitute; government agents are competitive, angry, and aggressive.

The movie is based on a popular video game. Coca-Cola vending machine visible.

Several characters smoke cigarettes, one man smokes a cigar. Some drinking (liquor and wine) in homes and clubs, once from a flask by someone who's visibly drunk. Villain's cohort snorts cocaine off a tray.