Hog Heaven: The Story of the Harley-Davidson Empire 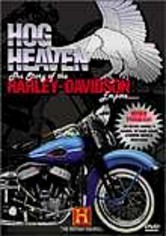 Hog Heaven: The Story of the Harley-Davidson Empire

1998 NR 2h 30m DVD
Before Harley-Davidson was a multimillion-dollar corporation, it was just a modest shack in Detroit. Follow its trail of success as this documentary takes a wistful look at the growth of an American icon through archival footage, photos and interviews with motorcycle historians and Harley-enthusiast celebrities such as Jay Leno and Peter Fonda.