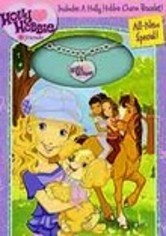 2006 NR 0h 44m DVD
1970s icon Holly Hobbie is updated for the 21st century in these delightful animated adventures. Holly and her buddies Carrie and Amy learn the power of secrets, including when to keep them and when it's OK to tell. The close pals discover that keeping secrets is an important part of being a loyal friend but also learn how to judge when it's better to share a secret with someone else.