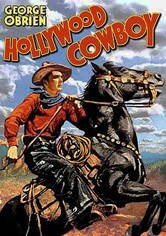 1937 NR 1h 2m DVD
Concealing his identity, film buckaroo Jeffrey Carson (George O'Brien) takes a job as a cowhand, but when he gets mixed up in a feud between extortionists and ranchers, he must prove he's as big a hero in real life as he is on the silver screen. After the bad guys use a plane to stampede the ranchers' cattle, Carson calls in a pilot friend to help catch the varmints -- which may just win over fetching ranch owner Joyce Butler (Cecilia Parker).