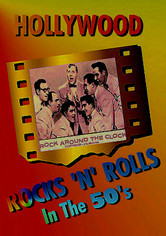 1999 NR 0h 44m DVD
Influential disc jockey and Father of Rock and Roll Alan Freed "hosts" this look at Hollywood movies with a rock and roll twist. Early clips of Freed are used to provide narration to this retrospective, which features movie clips from Jailhouse Rock, Rock Around the Clock and Rock! Rock! Rock! Also shown is footage of rock legends who lent their talent to Hollywood, including Elvis Presley, Little Richard, Jerry Lee Lewis, Buddy Holly and more.