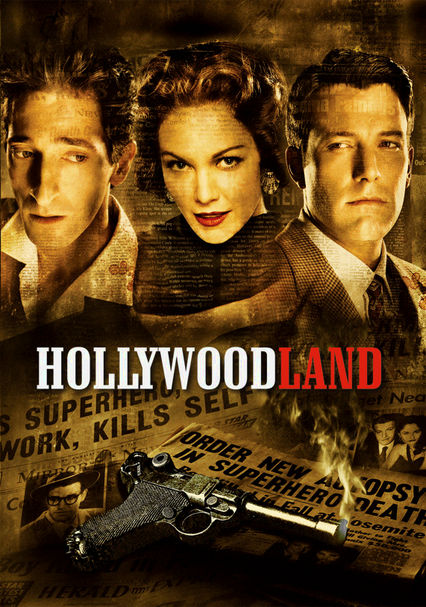 2006 R 2h 7m DVD
When the actor who famously played the Man of Steel in TV's "Adventures of Superman" turns up dead in Beverly Hills, a dogged private eye investigates and unearths a string of strange secrets in this gritty noir-style drama based on a true story.

Parents need to know that this noir-themed film isn't appropriate for kids. It includes violence in the form of several reenactments of a central character's death (as murder or suicide, all possibilities featuring gunshot to his head), as well as repeated images of the crime scene (blood on wall and bed). Another dead body appears on a floor, shot by her husband. A detective is beaten by thugs, resulting in a bruised/bloodied face. Characters appear in bed, though sexual activity is more implied than visible. Major characters smoke incessantly, drink frequently (to the point of drunkenness). Characters use frequent profanity, including multiple "f--k"s and disparaging slang for ethnicity, race, gender, and sexual orientation.

Some sex scenes, partially clothed, with activity indicated by sound (sighs and moans), by body motion, or (post-sex) by zipping up a fly; kissing; adultery; sexual language.

Repeated images of Reeves' dead body, with blood on the bed, wall, and ceiling.

Characters lie, cheat, and undermine one another in order to pursue wealth and power.

George worries about "Superman" being marketed on lunchboxes and elsewhere; Etch-a-Sketch, other 1950s products on display.

Frequent cigarette and cigar smoking by major characters; drinking at parties and in clubs.