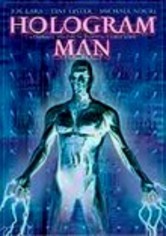 1995 R 1h 41m DVD
Crazed madman Norman Gallagher (Evan Lurie) has served his prison sentence in Holographic Status and is now up for parole in this action/sci-fi thriller. But after a slew of his minions meddle with the computer that holds him captive, Gallagher turns into the most horrifying killer imaginable -- a terrorizing psychopath with godlike powers. It's up to Kurt Decoda (Joe Lara), Gallagher's original arresting officer, to stop his deadly rampage.