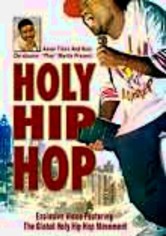 2005 NR 1h 22m DVD
Christopher Martin -- the man who put the "Play" in the 1990s rap duo Kid 'n' Play and who appeared in a string of House Party movies with his cohort, Christopher Reid -- shines a light on the phenomenon of "Holy Hip Hop" music and the growing street evangelism that's embraced it. As inspiring as it is educational, this compilation of footage captures a worldwide ministry on the rise that's as connected to words as it is to the Word.