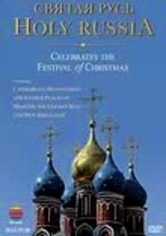 2006 NR 0h 58m DVD
The Moscow Chamber Choir celebrates a Russian-style Christmas in this collection of performances filmed at some of the holiest sites in Moscow. Many of the scenes were shot in the historic Golden Ring region outside Moscow, which is considered the birthplace of the Russian Orthodox Church. Russia's spiritual history is often overlooked, but the beauty of these monasteries and cathedrals demonstrates the country's deeply religious foundation.