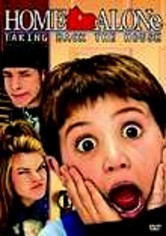 2002 NR 1h 23m DVD
With his parents separated, criminal-foiling kid Kevin McCallister (Mike Weinberg) plots to reunite them as he spends Christmas at the high-tech mansion of his dad's socialite girlfriend in this made-for-TV installment of the popular film franchise. But the return of Kevin's archnemesis -- ham-handed burglar Marv Merchants (French Stewart) -- puts more than a little crimp in his plans to play Cupid.

Parents need to know that the young child in this slapstick comedy has to face adult burglars by himself because nobody believes that he's telling the truth. The kid's attempts at fighting back include lots of slapstick violence and comedic peril (falls, injuries, hot fondue incidents) ... just like in the rest of the Home Alone movies. There are also clumsy attempts at coping with the issues of divorce and adult relationships.

Slapstick violence and perilous scenes: a mansion gets flooded and trashed, the bad guys fall through a window, feet get stomped on, boiling buckets of fondue drop on heads. Kevin's brother bullies him, while their mom does nothing about it.

Though the moral of this story ends up pointing to the joys of homey family life, the excesses of extreme wealth are so prevalent that the humble life seems absolutely bland by comparison.

Adults drink wine and champagne at dinner and parties. Kevin's dad's girlfriend "goes out" every night.