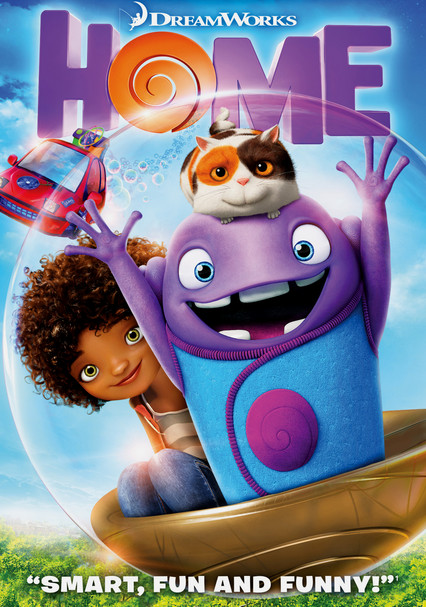 2015 PG 1h 34m Blu-ray / DVD
On the run from cosmic enemies, a band of aliens arrives on Earth looking for a safe haven, but one of them inadvertently gives away his location. As the extraterrestrial refugee desperately tries to avoid capture, he begins learning about humans.

Parents need to know that Home is based on Adam Rex's children's book The True Meaning of Smekday. This skillfully animated movie creates a believable world in which aliens known as The Boov, running from their enemies, must find a new planet to inhabit ... so they take over Earth. Human families get broken up in the forced relocations that follow, and Tip (voiced by Rihanna) is separated from her mother -- which could be upsetting for small children. She teams up with Oh (Jim Parsons), the most human-friendly of The Boov, and an adventure ensues. The invaders and their large ships could be a little scary, and at one point it looks as though a main character dies (though that's not the case). There's also a little bit of toilet humor, but not much in the way of strong language, inappropriately sexy stuff, or substance use.

Gargantuan alien spaceships invade Earth. A main character appears to be killed but survives. Tip has lost/been separated from her mother.

Themes of tolerance, the power of friendship, and being who you really are. The Boov (and all viewers with pessimistic leanings) are encouraged to embrace humans' irrational but endearing tendencies toward hope and perseverance. Boovs give up when the odds are against them, but Tip never gives up on finding her mother.

Many licensing/merchandising tie-ins off screen, including books, clothing, and more.